A Singer with the Sweetest Sound

To listen to Ha Phuong is to hear the sound of angels. Now American audiences will discover what her Vietnamese and Vietnamese-American fans have long known: that Ha Phuong has the makings of a global star.

Ha Phuong was born into a family of with a long artistic tradition as well as talent and ambition. Her father is musician Tran Quang Hien. In time she, along with her two sisters, Cam Ly and Minh Tuyet, became famous singers of contemporary Vietnamese music, separately and together.

From an early age, while growing up in Ho Chi Minh City (formerly Saigon)–Vietnam’s largest and most bustling city, which set the cultural and economic pace for the country—Ha Phuong learned to dance and sing. She participated in the school, city, county, and culture center events and also performed throughout Europe. Along with live performances she has recorded many videos and albums, and her DVDs and CDS have consistently sold well, and continue to do so today, even though she no longer lives in Vietnam.

As if becoming a singing star was not enough, Ha Phuong added actress to her resume, always dazzling her audiences and legions of fans with her numerous traditional and contemporary theatre and movie roles.

The winner of many prestigious awards, Ha Phuong was a finalist in a national television competition in 1991. Additionally, the movie “Ha Si Quan” (Officer Cadet), in which she starred, won second prize in film festivals nationwide. In the United States, Ha Phuong collaborated with The Gioi Nghe Thuat Productions, Asia Entertainment and Thuy Nga Productions.

Ha Phuong was the first to propose adding English subtitles to Cai Luong DVDs overseas. Her main goal was to encourage the younger generations of Vietnamese living abroad to preserve the culture and the native language.

Lost In A Dream Lyrics 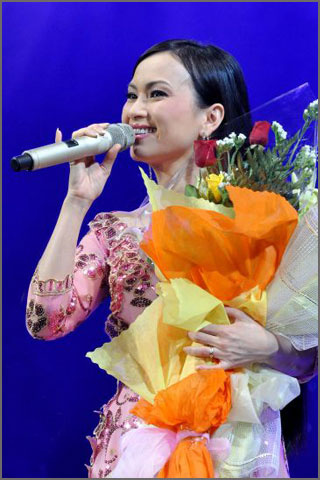