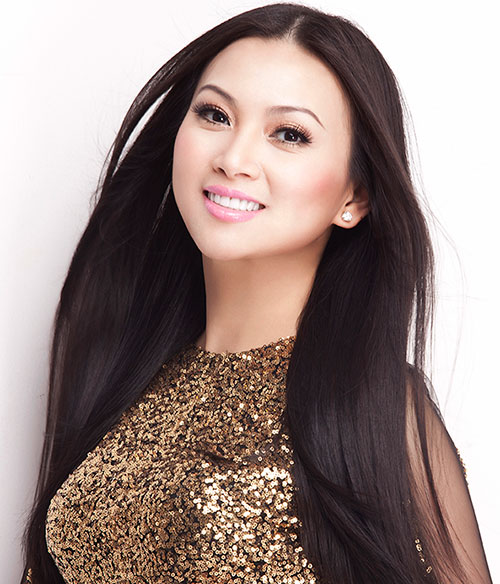 Ha Phuong, a petite dynamo with a huge heart and a big name in her native Vietnam is now a deeply entrenched New Yorker.  Living here, she is more determined than ever to help make the world a better place, inspired by her upbringing in Vietnam as well as her love for her two precious daughters, Diana Phuong Chu and Angelina Tieu Phuong Chu.

A superstar in parts of Asia, “HP,” as she is known to her friends, is an accomplished actress, singer and now movie producer: her soon-to-be released feature film, a dramatic thriller in which she stars, is called Finding Julia.  She is also releasing two music videos featuring her new English language singles, the hauntingly beautiful “Lost in a Dream,” and  the mysterious “Come to Me,” along the their associated music videos.

The profits from all of these ventures are earmarked for her two philanthropic entities that are meeting the needs of children in Vietnam and the United States.

From childhood on Ha Phuong has been inspired by music and the arts.  One of three daughters in a musical family, Ha Phuong discovered the power of performing, first singing with her two sisters informally, then using her talents as a singer, dancer and entertainer to express herself and connect with people around the world. In all, I have released 12 solo albums and numerous CDs in Viet Nam and the US. While in the US, I have worked with three worldwide media companies: The Gioi Nghe Thuat entertainment, Asia entertainment and Thuy Nga entertainment.

Always eager to develop further, Ha Phuong expanded her repertoire to include acting, studying with prominent teachers.   In New York Ha Phuong continues to pursue her own artistic endeavors, but is equally famous for her deep commitment to her charitable work.    On April 4, 2008 Ha Phuong unveiled the Ha Phuong Foundation with an initial million dollar donation in Huntington Beach, Orange County CA.

The Foundation is one of the largest of its kind and is the culmination of Ha Phuong’s passion for music and her fierce devotion to supporting children’s causes.  Her inaugural project to build a multi-media arts center partnership with the Boys & Girls Clubs of Garden Grove has already been completed.  In an extraordinary demonstration of her commitment to helping others, Ha Phuong pledged 100% of her future earnings from her music and acting career to the Foundation.

The Foundation’s work revolves around two primary objectives.  First, the organization provides aid to underprivileged children directly by building small houses and paying for necessities such as surgery, food, clothing and education.  Secondly, the foundation provides support for artists who wouldn’t otherwise have the opportunity to develop their talents.  Already HP has opened free schools for artists, enabling the underprivileged or disabled to pursue their dreams.

Specifically, the art center puts technology into the hands of young people and allows them to creatively express themselves while simultaneously providing them with market-ready job skills by training them to use professional equipment and software.  The Foundation focuses on musical teaching/career development programs for blind children. The program provides musical instruments, curriculum, and arts-based vocational training for these underserved youngsters.

Ha Phuong is also an integral part of the Vietnam Relief Effort, a non-profit organization that her husband, Chinh Chu, formed with his sister in 1999 which is dedicated to giving back to Vietnam and some of its poorest citizens. The charity has funded the construction of schools and footbridges across rivers in rural communities as well as subsidized surgeries for war veterans and the disabled. Another of the organization’s primary missions is bringing Vietnamese doctors to the U.S. for training.  The couple returns regularly to Vietnam to personally deliver money and supplies to deserving recipients. Everywhere you look, Ha Phuong is leaving her mark.  Last year she added “top donor to UNICEF” to her list of good works.

On a professional level 2014 has been an exciting year for Ha Phuong, as her production company was the executive producer for Finding Julia. The strong cast includes Andrew McCarthy and Richard Chamberlain, with Ha Phuong in the leading role of Julia.

This gentle soul, lovely and talented, is constantly seeking to further the reach of her works through the success of her myriad other projects.  With her tenacious dedication to everything she does and her bottomless compassion, Ha Phuong epitomizes the Renaissance Woman of the 21st century.